Recently, Senate Democrats filibustered Republican attempts to scuttle the nuclear deal with Iran, allowing the ‘deal’ to stand. Coincidentally, soon thereafter administration officials admitted that the agreement allows Iran to conduct ballistic missile tests anytime it wants. Secretary of State John Kerry confirmed, via a letter to Florida Senator Marco Rubio, that “it would not be a violation” for Iran to launch ballistic missile tests.
A U.N. resolution linked to the agreement calls for Iran not to conduct research related to nuclear-capable ballistic missiles, but experts say Iran could simply test the missiles with conventional warheads, and convert them to nuclear ones later. Iran could also flat-out reject a U.N. resolution without risking renewed sanctions, say the experts.
An unnamed senior foreign policy source called the thought of Iran being allowed to develop missiles that could hit the U.S., “terrifying.”
The U.N. has always been impotent. Now, however, the Obama administration and many fellow Democrats- in an unprecedented act of self-castration- have neutered the U.S., as well. 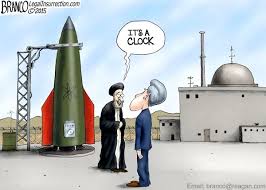 Iran is now free to fire off ballistic missiles like kids shoot off bottle-rockets in the U.S on the Fourth of July.


Ironically, the bottle rockets are illegal.
Posted by agatehunter1094 at 10:31 AM