My daughter will be attending a new school next week. My wife and I attended  the school’s family  orientation two nights ago. The agenda was, for the most part, routine. Class schedules were handed out, lunch money paid in, phy-ed uniforms purchased, teachers greeted, lockers opened.


I couldn’t help but notice, however, the myriad of flags on the walls of the cafeteria. Malaysia, China, Germany, etc. The U.S.? Yes. Israel? Well, no.


Also, there was a particular kind of “Coexist” sign up in her core class area that caught my attention. Nobody else seemed to notice it. It is pictured below for your bloggish enjoyment and edification. (I noted that Islam was at the top and Christianity at the bottom, but to fill out “Coexist” with the symbols that were used that’s as needs be, I’m sure). Islam, the Baha’i Faith, Christianity and Judaism are not “coexistable” (to coin a phrase) according to Islam’s own Holy Book. And neither is any other religion compatible with the religion of peace. At least the radical version of it. And individual rights and freedoms are certainly not compatible with fundamentalist Islam.


And, at the other end of the spectrum, ‘males/females’ better at least coexist, and hopefully much more, or there will be no existence for anyone.


However, what may have been most striking, on such a rich instructional sign (“signs, signs, everywhere are signs, breaking up the scenery and tearing up my mind”… to quote lyrics from the  catchy hippie-era song ) is the nod to paganism. Paganism?


“Irreligious and hedonistic” is one of the Webster definitions for paganism. That in itself is a great message for the impressionable kids, but there are, also, Satanic undertones to some forms of paganism, as well.


So, to recap: the new tolerance expects us to openly, cheerfully accommodate a religion that bluntly states all infidels (non-practitioners of that religion) are to be killed, converted or made into slaves? I’d personally love to co-bleeping exist with you, if  it wasn’t for that little issue! (Hard for us to “coexist” when you kill me…as then I don’t exist anymore. But you didn’t put this sign up, so I need to cut you some slack…).


And agnostics and atheists are one thing, but paganism? It gets the “I” in coexist? Blithely, cheerfully "coexisting" with evil...is evil. I hope we don't have to "coexist" with the consequences of that...for eternity.
(This 'sign' isn't really preaching tolerance, but intolerance of any normative standards of decency and of any differing viewpoints. One or two people that complain often get a Christmas-themed or Christian display yanked from the 'public square'. A girl was recently removed from her class for wearing a Mitt Romney (Mitt Romney!) shirt. I wonder how I'd be received if I demanded they take this 'sign' down?). 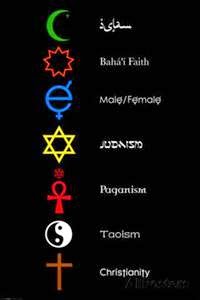