As we all know, June is Pride Month, and, in celebration, Kellogg’s is releasing a new heart-shaped cereal! The cereal, Together with Pride, was created in partnership with GLAAD (Gay & Lesbian Alliance Against Defamation), is berry-flavored, and contains colorful pieces topped with (edible) glitter. In short, it’s fabulous! Yayyyyy!!!

The cereal is scheduled to appear on store shelves—nationwide-- in mid-May and will only be available for a limited time. The 7.8-ounce boxes have a suggestive suggested retail price of $3.99 and would be a bargain at twice the price! Better yet, Kellogg’s will donate $3 to GLAAD for every box sold/purchased. (Make certain to upload your receipt to “Kellogg’s Family Rewards” to guarantee your donation is processed.)

Kellogg’s released a statement saying, “The delicious new recipe features berry-flavored, rainbow hearts dusted with edible glitter. The cereal marks the latest chapter in a years-long partnership with GLAAD and is the evolution of the fan-favorite — All Together Cereal — which previously was only available online.”

Kellogg Wellbeing tweeted about the special-edition cereal, writing, “All are welcome to the breakfast table with our NEW Together with Pride cereal coming to shelves soon. For every box sold, Kellogg is donating $3 to @glaad to support the LGBTQ+ community @KelloggCompany”

Last year, Kellogg’s introduced a limited-edition variety pack of its popular breakfast cereals, previously referenced, called “All Together Cereal” in support of the pro-LGBTQ lobbying group GLAAD. The company has previously received various awards for “diversity” and “inclusion,” though its main competitor, Twin Cities based General Mills, is equally woke, having received the approval of several LGBTQ activist groups, including the “Human Rights Campaign.”

Because, after all, no matter one’s gender, orientation, kinks, belief system, or expression of intimacy, we must lovingly embrace them. Unless, obviously, “they” happen to be former President Trump-- or one of his supporters. Or a conservative Christian. Or a Republican. Or believe marriage is meant to be between one man and one woman. Or are against abortion. Or are for the Constitution and/or the Bill of Rights. But, other than that, tolerance and inclusion are the most vital and universal values that one must hold and exhibit. 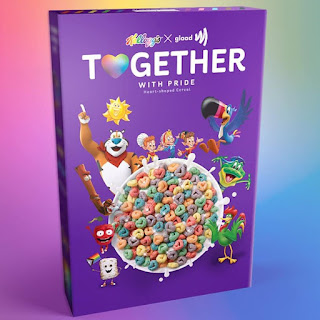