A pair of pro-life college students were arrested recently for chalking “Black Pre-Born Lives Matter” on a sidewalk outside of a Planned Parenthood clinic in Washington, D.C. The two were charged with…wait for it…defacing public property…which is extremely odd, since they were participating in a protest organized by Students for Life of America. I thought we all agreed that protesting was a cherished right of every American. And that Black Lives Matter. I guess Pre-Born Black Lives are the exception to the rule. The arrests were also odd since the group was originally told it could paint in the street and was even issued a permit to do so, with the temporary paint it had purchased. But, when they arrived at the clinic, police threatened to arrest them if they did just that. They then asked if they could use sidewalk chalk to convey their anti-violence message. They were threatened with arrest again.
Yet, mere weeks ago, D.C.’s mayor painted “Black Lives Matter” slogans-- in giant letters-- onto the streets of her city with permanent paint, prompting the pro-life students to remark: “In doing this, she proclaimed not only what those of us in the pro-life [community] genuinely believe and fight for every day in front of Planned Parenthoods and other abortion facilities across America, but she also opened up the streets of Washington, D.C. for public expression.”
Just not that kind of expression. Black Lives Matter good. Black Pre-born Lives Matter bad. Free speech for Marxists good. Free speech for Christians bad. Discrimination based on race, ethnicity, sex, gender-identity, sexual orientation, or (most) religions bad. Discrimination based on viewpoints and political beliefs good.
If you happen to be a member of a protected group, such as BLM or Antifa, you can deface and destroy public property and burn down private property with impunity. You can paint your favorite slogans on anything you like, anywhere in the country. Others will applaud you. Or do it for you.
However, if you are of a bit more conservative persuasion, and you dare to try to write a pro-life message on a sidewalk with Crayola Sidewalk Chalk that will wash off the very next time it rains…you will be arrested.
Incredible. Or it damn well should be. 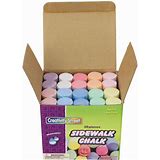