It was the biggest predator ever to trod the Earth, with a ‘crocodile’ snout six feet long, full of large teeth. And it had webbed feet, like a giant duck.


‘It’ is Spinosaurus, the only known dinosaur to, apparently, live much of its life in the water. A fifty foot long predator that looks like it was put together by committee. It was unveiled by scientists this past  Thursday in Washington, D.C. (This actually reminds me of a classic ‘Monty Python’ sketch in which the archeologists were putting the final touches on an upright dinosaur skeleton in a museum. The announcer intones “scientists now know the animal looked very much like this!” as they placed a large human thumb on its ‘face’ to complete the skeleton). Scientists say the beast was known to them before, but that the bones from a long-ago fossil discovery were destroyed in Germany during World War II.


They say the new skeleton found in Morocco reveals the beast was far more aquatic than originally thought. Spinosaurus had a long neck, strong clawed forearms, powerful jaws and the dense bones of…a penguin, according to a new study released by the journal Science. It sported a 7 foot tall spiny ‘sail’ on its back and lived 95 million years ago. It propelled itself through the water with flat feet that were probably webbed according to the study. Study lead author Nizar Ibrahim said “it’s like working on an extraterrestrial or an alien. It’s so different than anything else around.” He was standing in front of a room-sized reconstruction of the skeleton at the National Geographic Society, which partially funded the research. ( I have been assured there were no human thumbs anywhere in sight).


Ibrahim went on to say that the creature was “so bizarre it’s going to force dinosaur experts to rethink many things they thought they knew about dinosaurs.” Until now, scientists had thought that all dinosaurs stuck to the land with only the occasional, brief trip to water. But the new skeleton exhibits clear evidence of aquatic living, including nostrils positioned high on the skull, allowing the beast to be mostly submerged for extended periods of time. Study co-author Paul Sereno called it “an evolutionary experiment going into the water.”Spinosaurus grew 9 feet longer than Tyrannosaurus Rex and feasted on aquatic creatures the size of cars in an area that was history’s “most dangerous place” Ibrahim said.  Three giant predators roamed the land, and 25-foot long sharks, giant sawfish and various types of ‘nasty’ crocodiles lurked in the water. Even the sky had giant predators.


An article by Seth Borenstein in the Associated Press (Friday, September 12) quoted University of Maryland dinosaur expert Thomas Holtz, Jr. as stating “The new find is amazing and convincing, showing how wrong scientists have been about this dinosaur and about how diverse dinosaurs can be.”


In other words we may have gotten most everything wrong in the past, been deluded for decades, but we’re certain that now all our beliefs and assumptions are unquestionably spot-on!


Truth be told, I respect that these scientists are apparently  open-minded and willing to change their established beliefs  and  to question the conventional wisdom whenever new evidence comes to light.


Most climate change scientists? Not so much.


Who are the real dinosaur brains?
(All emphases/italics mine) 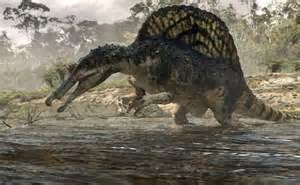