Brandeis University Gets Ever Woker

Brandeis University in Massachusetts has done it again. The school’s Prevention, Advocacy and Resource Center (PARC) had already compiled a list of “oppressive” words and phrases with accompanying suggested alternatives earlier this year. Now the PARC people have added to the list. Given it a verbal booster shot if you will.

The original list contained such potentially offensive terms as “killing it,” “take a shot at,” and the previously popular progressive cautionary phrase “trigger warning.” All of these were, of course, no longer acceptable because of their connotation with firearms.

The ever-vigilant students comprising PARC recently added over a dozen new terms and cliches to the verboten list, according to the New York Post. Exciting new additions include “I’m so OCD” and “whipped into shape.” PARC’s suggested alternative to the former is “I’m very organized, detail oriented.” As for the latter, which it frets could evoke “imagery of enslavement and torture,” we are encouraged to instead say “organize,” “spruce up,” or “put in order.”

“Handicapped space” is now also to be cancelled, as it has been lumped in with terms that “can contribute to stigmas about and trivializes the experiences of people living with disabilities, mental health conditions, and more.” Apparently, one should also avoid “committed suicide,” as this makes a value judgment regarding “suicidality.” Huh? Perhaps in place of “committed suicide” we should say “fatally challenged his own conception of consciousness?”

Part of PARC’s list is titled “Language That Doesn’t Say What We Mean,” an entry which encourages students “to be transparent” about what they are saying. For example, saying “everything going on right now” is deemed too vague. Students are urged to be more specific and to mention things like “police brutality,” “protests,” or “BLM.” Or, might I suggest, “the stunning level of obfuscation and prevarication now being perpetrated by the mainstream media, the Biden administration, and academic entities like PARC.” A little lengthy, but has a nice ring to it, no? 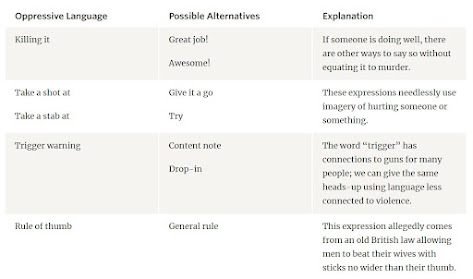 *”The Most Dangerous President In History”—Nick Adams (2022; Post Hill Press)