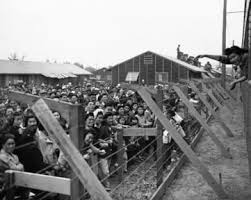 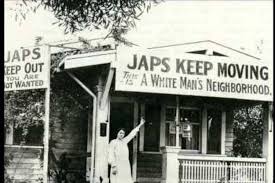 These heartbreaking photos clearly show the plight of Japanese people in the United States today under Trump administration policies. These images, I believe the first of their kind to surface, are so despicable, words fail me. Internment camps? Seriously?! Even a respected member of the media, such as myself,  a person who follows current events closely, was blind-sided by these pictures. Man’s inhumanity to man is, apparently, unceasing…and increasing. Please retweet these disturbing reminders of Republican Party bigotry and intolerance. And remember to “like” my post! Shout out and tip of the hat to New York Times Magazine editor Jake Silverstein!      Twitter.com/mainstreammediamoron/status/should befiredifnotcastrated         1,997 people love this     9,882 people are talking about this

I guess these photos were actually from World War II, when FDR, a Democrat, was president. My bad.  I was busy with my family this past weekend. But this does nothing to take away from the fact that Trump is heinously anti-Japanese.
Posted by agatehunter1094 at 10:56 PM