The Salvation Army’s Alexandria-based leadership has created an “International Social Justice Commission” just in time for its holiday donation drive. The commission has developed and released a “resource” to educate its white donors, volunteers and employees called Let’s Talk about Racism. The “resource” claims Christianity is institutionally racist and calls for white Christians to repent and offer a “sincere apology” to Blacks for being “antagonistic…to Black people or the culture, values and interests of the Black community.”  What about the many Black Christians? Baptists?

Talk about tone deaf! Christians have historically been abolitionists-- and champions of the downtrodden as a whole. And, today, Christians themselves are the most persecuted group around the world. To say that the Salvation Army’s brain trust made an unforced error would be an understatement. It’s usually not a good thing to berate your potential donors immediately before asking them for money.

Tone deaf? When I hear the Salvation Army bells ringing this Christmas season, I will pretend I don’t hear anything at all. And quickly walk away. 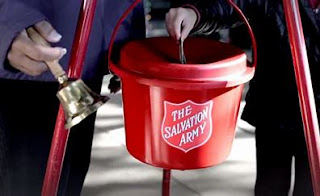