Seattle’s leaders are hell-bent on ruining a once great and beautiful city.

Mayor Jenny Durkan let Black Lives Matter thugs take over several blocks of the city’s core last summer. The city government provided free housing to the homeless, allowing them to spend their government checks on illicit drugs.  And now the city is using taxpayer dollars to purchase drug paraphernalia for its heroin addicts. Seattle’s Downtown Emergency Service Center (DESC) is reportedly utilizing its so-called “low barrier” shelters to provide heroin addicts with pipes, syringes—and advice on the best ways to get heroin into their systems. That lends a new twist to Reagan’s famous (sarcastic) phrase, “I’m from the government and I’m here to help!”

The city has gone so far as to put up “how-to” posters inside the shelters and encouraged residents to ask how to rectally inject heroin via “booty bumps.” They are even giving out “booty bumping kits.”

In their purely benevolent quest to help homeless addicts, the DESC posted several informational flyers at their Navigation Center. One of these flyers notes that the DESC is passing out new heroin pipes and encourages addicts to smoke heroin rather than injecting it, because “Smoking is a lower-risk alternative to injection. Give it a try!”

But what about the booty bumping kits? Well, these are a good choice “if your veins are hard to hit.” And, they don’t “leave tracks.” At least where most people would be able to see them. I hope. All-in-all, a better way to inject for those who are, for some sad reason, unable to smoke heroin. (An important reminder is called for here: smoking cigarettes is bad for your health. So says the Surgeon General. Don’t be a fool!)

There is only one commensurate, logical—and principled—response to DESC and the Seattle leaders responsible for this program: “Shove it up your ass.” Give it a try! 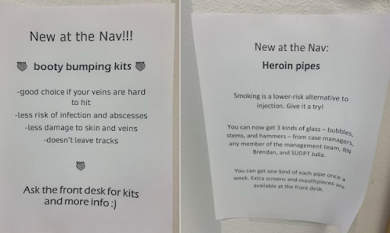