House Speaker Nancy Pelosi recently admitted she is more than open to a possible attempt to unseat duly elected Rep. Mariannette Miller-Meeks (R-Iowa). Miller-Meeks narrowly defeated Democrat candidate Rita Hart in November and Iowa state officials certified the election results in January. Miller-Meeks was subsequently sworn into Congress. Hart petitioned Congress over the election results in December, instead of appealing to the courts. The House Administration Committee—unsurprisingly-- tabled a motion to dismiss Hart’s petition this week, enabling her challenge to proceed. Hart’s campaign claims there are still a handful of legally-cast ballots that have yet to be counted.

Pelosi was recently asked if she believes there’s a scenario where the Democrat-controlled Congress could overturn the state-certified election results. The always punch-drunk Speaker answered, “Could you see a scenario? We don’t do press conferences on ‘can you see a scenario.’ Of course! Of course! I respect the work of the committee… we’ll see where that takes us. There could be a scenario to that extent.”

Are you kidding me? She wants to overturn the results of the cleanest, smoothest election in American history and deny the will of the people? She wishes to oust a duly elected representative and imperil our democracy? She wants to stage a small-scale insurrection? It is always difficult to discern whether Democrats so blatantly traffic in hypocrisy because they are insane, evil, or both.

There were literally hundreds of irregularities and outright instances of malfeasance and voter fraud, virtually all beneficial to now President Biden, in the 2020 presidential election. Yet Democrats and their sycophants in the legacy media immediately and continuously smeared any and all who dared to question the outcome…either on a national or a local level. Almost every article or talking head used the term “baseless allegations” to describe the concerns of virtually half the country. Those who supported then President Trump were aggressively told to accept the results and get on with their lives. Challenging the election results was anti-American. Treasonous, in fact. Anyone who had the temerity (or integrity) to point out the obvious was likely to be banned from social media, ostracized by the elites, and possibly fired from their jobs.

But the old saying “what’s good for the goose is good for the gander” doesn’t apply here. No standards ever apply to Democrats. And, besides, Democrats no longer believe there are gooses and ganders, just an ever-changing continuum of genders.

And so it appears they will continue to be able to engage in the very behavior of which they baselessly accuse Republicans…with impunity…and in perpetuity. Unless Americans somehow suddenly wise up and grow a spine… and a pair. 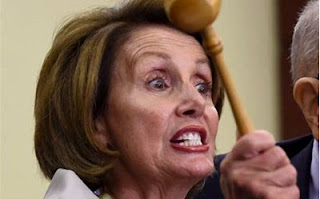