Great news! The first part-human, part-monkey embryo was recently created by scientists at the Salk Institute in California.  Despite the ethical concerns of many, researchers succeeded in growing human stem cells in monkey embryos to try and better understand how the cells communicate. The human stem cells, known for their ability to become different types of cells under the right conditions, were injected into macaque embryos in a petri dish. These embryos were monitored for approximately 20 days and were subsequently destroyed. Those against this kind of inter-species experimentation believe it could someday lead to the existence of "human-nonhuman" creatures.

In other words, “human-nonhuman tissue masses.”

Some would say: “Blending human cells with those of animals? What could go wrong? Why not see what can happen? The backward, Christian types that claim to have ‘ethical concerns’ regarding this advancement of science are just clinging ever tighter to their guns and their God. They’re probably just upset that educated progressives don’t believe in Genesis and the Garden of Eden. Or an all-powerful guy (of course it’s a male figure) in the sky. I mean, since there really is no God, why shouldn’t we act as one? If a creature we aren’t comfortable with ever does result from our experiments, we can just kill it anyway. So, what’s the problem?”

Me?  I admit I’m not entirely comfortable with the manipulation of DNA and genetic engineering. Isn’t transsexualism and transgenderism enough? Call me bananas if you will, but I don’t think it’s beneficial to man nor beast to monkey around with trans-speciesism.

You can fling poo at me for saying this, but we are all becoming naught but organ grinders monkeys to elites and experts everywhere. 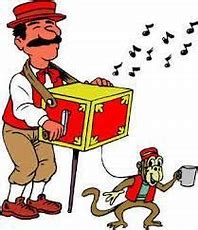