Police in Jordan, Minnesota recently received a disturbing call urging them to check on the welfare of a coat-less man standing outside in sub-zero wind-chills hugging a pillow. When officers arrived on the scene they discovered that the “man” was actually a realistic cardboard cutout of MyPillow CEO Mike Lindell.
A police spokesperson said, “Those cardboard cutouts sure can look real from a distance and the caller certainly was not wanting to get too close thinking who is this deranged person standing outside in the cold hugging a pillow; always better to call the police.”
The ubiquitous MyPillow founder and CEO himself found out about the incident. He apparently found it amusing, as he tweeted out an article about it replete with laughing emojis. It appears that at least Minnesotans’ sense of humor hasn’t been frozen…yet.
In related news, a woman called 911 to report a large, green dinosaur outside of a Sinclair gas station in Braham, Minnesota last week, while another caller reported a “freakishly large young man dressed in white and red checkered bib overalls” standing outside a Marc’s Big Boy restaurant in Milwaukee, Wisconsin the same day. Police are investigating both reports. 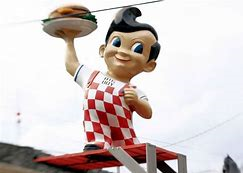