Ohio’s Celina Middle School suspended eighth-grader Tyler Carlin for including a “Nerf gun” in his school project to honor fallen troops. Master Carlin wanted to create a “battle cross” monument for his history project, in part because a family friend told him about his time in Vietnam. He also replied to a question from “Fox & Friends’” Brian Kilmeade that the project meant so much to him because a soldier’s brief time in front of a battle cross is “the last chance that…the military, their friends get to say goodbye to them” before going back out to fight and leaving their fallen comrades-in-arms behind.
Carlin said his teacher knew about his plans, yet administration officials suspended him anyway for bringing a toy gun to school, a violation of school policy. The student appeared on “Fox & Friends” with attorney Travis Faber. Faber stated: “After he had started serving the suspension and we had some time to look into this, we said ‘this is ridiculous,’ can you make the suspension go away and apologize to Tyler for what you did and we’ll make this all go away’ and they refused to do that.”
When queried about the suspension, the Celina school board said it would not make any statement, as that might violate a “student’s right to privacy.” Funny, the board certainly had no qualms about violating a student’s First Amendment rights (or his right to sanity and dignity).
Shining a ray of hope on the issue, supporters staged a protest at the school shortly after Carlin’s suspension was announced. Faber said, “We’re going to do whatever we have to, to make this right.”
Nerf “guns” are cheap plastic toys that shoot soft foam darts. Will we ban Styrofoam “knives” too? Conversely, maybe we could get abortionists to show up for work with Nerf-like soft foam curettes, pliers, scissors and catheters.
Banning Nerf guns from school grounds or replacing abortionists’ metal tools with soft foam substitutes, which would save more lives?
Young Mr. Carlin wasn’t suspended for possessing a Nerf toy. He was suspended for honoring the military, believing in Second Amendment rights, and generally acting as if he might grow up to be a conservative and a patriot. All of which are anathema to most of today’s educator-indoctrinators, who wouldn’t mind seeing the Tyler Carlins of the world end up like those for whom he wanted to erect a battle cross.
“Happy” Veterans of the Vietnam War Day. 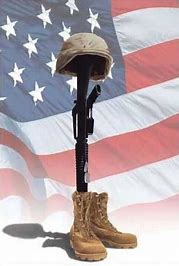