Dick’s Sporting Goods CEO Edward Stack says the company is considering removing all hunting gear from its 732 stores. The retailer already pulled all hunting equipment from 10 of its underperforming stores this past August, replacing it with an assortment of items pertaining to other sports. Stack said the company will “wait and see how the 10-store test does” before making a final decision. The company previously stopped selling certain types of firearms and magazines after the Parkland, Florida shooting.
Why stop there, though, Ed? If you’re making business decisions based on bad things happening to people who use or are affected by certain types of products you sell, don’t pick and choose. Let’s dispense with the hypocrisy.
If the chain truly cared about people’s well-being, it would stop selling all football equipment immediately. Or has no one in the company heard about chronic traumatic encephalopathy? Instead of adding to its assortment of soccer equipment, it should cease and desist all sales of soccer and soccer-related products tomorrow. Soccer is a very close second to football in the number of concussions its participants suffer. Moreover, there has been a stunning 58% increase in cases of pediatric concussions in the past decade. And female soccer players are experiencing nearly twice as many concussions as their male counterparts, according to a recent study by the American Journal of Sports Medicine. Concussions can lead to brain damage and a life not nearly as fulfilling as it otherwise would have been.

On top of even this, soccer is responsible for a staggering number of serious knee injuries.

Hockey items should be swept off the floors, pegs and shelves of Dicks Sporting Goods outlets with all due haste. Not only is the sport dangerous, but the equipment is so expensive that it is an affront to all but life’s lottery winners…i.e. suburban white people.
And what about baseball bats? Are they not deadly? Is Mr. Stack not aware that there have been many more bench-clearing brawls and melees in major league baseball the past 15 years than in the National Hockey League? Is this the behavior he is trying to encourage?
The company even sells boxing equipment! Could they not find any jousting gear? Maybe a nice selection of daggers? Dicks’ virtue-signaling is not appealing to anyone with a properly functioning brain. Come to think of it, maybe that’s why it is reveling in the orgy of concussions, pain and suffering it is aiding and abetting.
Take my advice, Ed: if you don’t want to potentially offend or hurt anybody: 1) go big with LGBTQ gear and apparel, 2) just sell Chia Pets, cummerbunds and cheese straighteners…and/or 3) re-brand as “Dick-less Sporting Goods” and sell a wide variety of “pussy hats.” 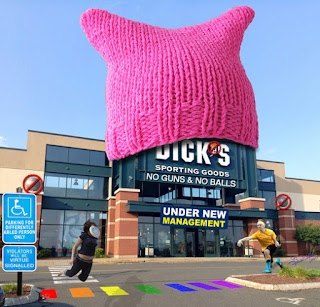