Nikki Haley And The State Of The Union

Nikki Haley, Republican governor of South Carolina, gave her party’s “rebuttal” to President Obama’s State of the Union speech Tuesday evening. It was widely applauded in the media, as well it should have been. It played right into their hands and validated several of their most cherished canons.
In short, it really wasn’t much of a rebuttal at all. She agreed with this most partisan of president’s call for civility and bi-partisanship. She also agreed with the president that we shouldn’t listen to the loudest and angriest voices among us, i.e. the American people.
In fact, rather than touching on the reasons why such a large percentage of the populace is unhappy with the state of their union, she spent her precious airtime blasting her own party’s front-runners for the 2016 presidential election, and by default the more than two-thirds of her party’s base that enthusiastically support them.
She was presented with a golden opportunity to repair and strengthen her party’s ties to the American electorate. Instead, she berated conservatives and verbally attempted to escort them out of the party, leaving more room in the country club for the establishment elites. Incredible? I wish that were the case.


Snatching defeat from the jaws of victory. With apologies to Geico, when you are a member of the stupidest political party in the history of the planet…it’s what you do. 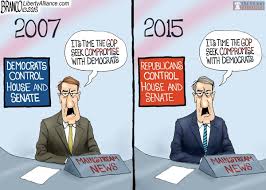