It is impossible to repeal the law of supply and demand, despite the fondest wishes of progressives in – and out of- academia. It is that fundamental truth- and that very law- that is behind the skyrocketing costs of a college education. The incredible, wasteful swelling of administrative types and their salaries is one part of the problem. The rampant spending on the frills and comforts of modernity is another. Not every classroom needs wi-fi, I-pads, air conditioning, etc., and not every building or even campus should require a lounge, climbing wall, “safe space,” et. al., either.
Yet these trends are part of a larger issue, an “elephant in the room,” if you will, that no one wants to acknowledge. When government decides that it’s best that every young person attend a college or university, no matter what their grades are and irrespective of their knowledge, intelligence, discipline, financial situation or proclivity to do so, that alone will lead to more students heading off to college. When that pressure is wed to a vastly increasing number of programs and loans to help students attend these bastions of higher education, the supply of students who can afford to do so goes up dramatically, thereby allowing these institutions to significantly raise their tuition and other fees, leading to a need for more money to be made available to encourage and allow students to continue with Uncle Sam’s arbitrary higher-education mandate.  This cycle has repeated itself over and over for several decades now.
The number of universities (and instructors) has not increased at anything like the rate of student participation, though, as these are inefficient entities with many bureaucratic and politically-correct strings attached to them. However, awash with cash, universities have spent unwisely and profligately on non-classroom related items, such as “creature comforts,” and extra administrators who help lobby for more money to be spent on higher education, public-sector unions, etc.
The cry from campus now is that college attendance should be free…and some smarmy, pandering, opportunistic politicians are going along with that insane demand. Obviously, nothing is free. Are the colleges going to lay-off all of their administrators? Will the professors give up their salaries and volunteer? There wouldn’t be any money to buy new things, for building maintenance and grounds keeping…or anything else. Of course this wouldn’t be the case. With a nearly unlimited supply of students, the demand for a college education would be likewise nearly unlimited, and the tuition rates would skyrocket yet again.
No, what is really meant by free, is free to the students themselves, of course. Those staffing the colleges…the administrators, professors and their public-sector unions, would be gaily partaking of the largess, as well. 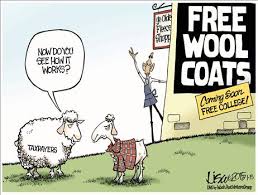 It would be the taxpayers, especially those in the middle class- college educated or not- that would get ‘taken to the cleaners.’ As the humorist P.J. O’Rourke once presciently wrote, “If you think health care is expensive now, wait until you see what it costs when it’s free.”
We need to dispense with the political-correctness and the Pseudo-socialism and return to a time when students studied the Greek and Roman classics and were also exposed to the works of more recent Western philosophers such as Locke, Montesquieu and Burke. By so doing, students would get acquainted with the best political philosophy known to man and would learn what it means- and what is required- to have and retain a “free,” republican form of government.
A little Adam Smith wouldn’t hurt, either.
Perhaps then they’d understand the costs associated with their demands.