Those who quarrel with the Second Amendment are really opposed to the idea that one has an inherent right to defend oneself. They are, at root, deniers of natural law.
These same “progressives” can countenance neither an individual’s right to defend herself, nor, collectively, the country’s. On the one hand, they claim that an individual’s right to bear arms is somehow revoked now that we have a standing army or “permanent militia.” The collective renders the individual moot. Yet, on the other hand, they are against new weapons systems and increased military spending and for unchecked, unfiltered immigration, terrorists or no. Thus the collective- the country- is unable to properly defend itself as well.
It’s hard to tell if their positions on disarming the innocent are inconsistently consistent or consistently inconsistent.


Though it’s easy to see that they are insane. 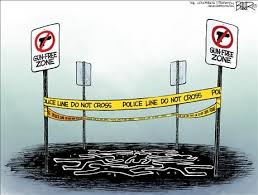