Michigan Governor Gretchen Whitmer appeared on Meet the Press recently to bemoan all things Trump and Trumpian. During the interview, conducted remotely with Whitmer at her home, a pin on a table behind and to the right of the tyrannical and mind-blowingly unappealing governor was visible. The pin read “8645,” an obvious reference to getting rid of President Trump, the 45th Chief Executive in American history.

Some, including members of Trump’s campaign, interpreted the pin as a plea to kill the president, as to “86” someone can have that connotation. According to most dictionary definitions, however, “86” means to get rid of, throw out, reject, discard, or cancel.

In any case, it was positioned so that the camera couldn’t miss it, in what was a stunningly disrespectful gesture at best. At worst, it could be seen as an incitement to violence or an attempted coup. (This came after Whitless Whitmer, inaccurately, blamed the president for a foiled plot to kidnap her. Turns out, the plan was hatched by a motley crew, including a couple of Anti-Trumpers.) Even more hypocritically, the message was placed directly under a Michigan license plate reading “RESPECT.”

Did the producers at Meet the Depressed Press sign off on the “message?” It would seem likely, tacitly if not explicitly.

But maybe I’m being too hard on the governor. Maybe it was all just coincidence. Perhaps “86-45” just refers to her I.Q. as measured before and after a few cocktails. Maybe it’s her favorite number. Some people like “2” or “3” or “7.” Perhaps she is just really into “8645.” Maybe her memory isn’t the best and 8645 is a reminder, the last four digits of a friend’s phone number or of the combination to her safe.

Nah. “8645” is a reminder, but a reminder that Whitmer, like Speaker Pelosi (who tore up a copy of the president’s State of the Union speech on live television the moment it concluded), is a vile shrew, a small-minded partisan hack unworthy of her position, and an arrogant statist drunk on power. 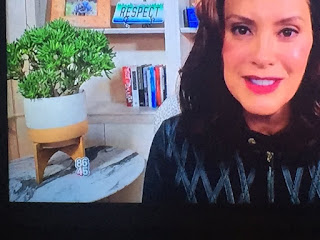