Live in the Pacific Northwest? Upset that Ruth Bader Ginsburg passed away and those diabolical Republicans are planning to replace her ASAP? Then join the group “Shift 2 Bikes” and participate in a naked bike ride protest! You may already have missed the “Full Moon Naked Ride” that was set for Portland on October first, but I’m sure they will have another one in the near future. Portland was also to be one of many venues for the “World Naked Bike Ride” but it, tragically, was cancelled due to the COVID-19 pandemic.

Shift 2 Bikes touted the event as a protest of “the Senate fast-tracking the appointment of a replacement for Ruth Bader Ginsburg on the Supreme Court.” It encouraged people to “ride under the full moon.” (Or behind one!) The only article of clothing required was a facial mask. Portland police, however, urged participants to wear a helmet and shoes to avoid injuries. The PPD also helpfully suggested that participants’ bikes sport a light and that riders drink plenty of fluids on their excursion. (I don’t care to elaborate on that.)

Though public nudity is generally illegal in Portland, the event is technically considered a “protest,” and is therefore protected under the First Amendment as free speech. Well, nothing talks louder than a big...

Anyway, the World Naked Bike Ride was, officially, a protest against oil dependency and pollution-based transport-- as well as a vehicle (like that?) to highlight the vulnerability of bicyclists around the globe. But protesters frequently show up to tout other causes, such as cyclist safety (“start seeing bicycles!”) and body positivity. The event has drawn as many as 10,000 bare bikers in past years.

The Portland Police Bureau issued a statement noting that officers would be dedicated to the event to ensure the safety of cyclists and others alike…and to provide assistance at intersections. Whatever that entails. The Bureau also asked non-participants to be patient with any minor traffic delays the vent may cause.

Naked Bike Ride “protests” may well become more and more popular with folks who just don’t have the courage to burn down businesses and rough-up the old and infirm. Want to save the whales? Hop on a Schwinn au naturel! Upset at Trump? Take off thru town on a two-wheeler, sans apparel. Pissed off that pangendered Albanian Pisces are underrepresented in corporate boardrooms? Hop on your Huffy in the buff. Devastated that the World Naked Bike Ride was cancelled this year due to the Trump Virus? Partake in—or organize—a local Naked Bike Ride. We know Portland will allow it. I’m sure Seattle would welcome you, too, in all your birthday-suited glory.

Stumptown’s finest have vowed not to arrest any naked bikers unless they stray from the approved route. That said, the mandatory facial masks will grant the bikers anonymity. At a bare minimum. 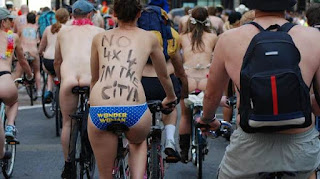