To say these are strange and perilous times is an understatement.
A Sudanese national recently went on a rampage in the French town of Romans-sur-Isere, south of Lyon, attacking 7 people on a busy street, killing two and wounding five. He, of course, was chanting “Allahu Akbar” during the assault. This act of terror has gone largely unnoticed by the mainstream media, as they are solely fixated on the COVID-19 crisis.
Meanwhile, nearly two dozen sunbathers were issued citations at a California beach for violating the formerly Golden State’s stay-at-home order. Not to be outdone, Riverside (California) County Sheriff Chad Bianco announced via a YouTube video that residents could now be imprisoned for violating an order to cover their faces in public during the current pandemic. County authorities averred that local law enforcement agencies do have the power to enforce the order “as they deem necessary.” Nice that local authorities have the power to override the Constitution at their discretion.
Counties and states around the nation are releasing thousands of inmates from jails and prisons amid fears that they could experience coronavirus outbreaks and the federal prison system may soon do the same, Attorney General William Barr indicated. “Obviously, the health and safety of our inmates and our staff is a top priority for us,” Barr remarked at a Justice Department news conference. He added, “We take seriously our responsibility to protect those who are in our custody.” That’s nice, but what about the rest of us? We are all essentially in custody now.
But back to California, where officials deemed firearm outlets non-essential and ordered them to close during the stay-at-home period. The state eventually relented after the National Rifle Association and other Second Amendment-supporting groups sued Governor Gavin Newsome and other state officials, allowing the stores to reopen. (Why would we need to protect ourselves now, when so many criminals are being released into our communities?) And, in Malibu, two lifeguard boats and a brace of deputy sheriffs were deployed to arrest a lone paddle-boarder. The paddle-boarder was near no one. At least until the deputies brought him in to be booked.
Incredibly, these are not the worst abuses of power. In India, police are reportedly beating people who do not comply with social distancing rules. And Philippine President Rodrigo Duterte instructed his police to “shoot them dead” if residents of his nation too aggressively fought the lock-down measures. Yes, “shoot the bastards dead, we’re trying to save lives!”
On top of all this, a pedophile rapist was recently released from a Massachusetts prison to protect him from the coronavirus.
To recap, we are letting untold thousands of criminals out of jail so they will be less likely to contract the coronavirus. Yet, we are threatening to incarcerate people for sunbathing and paddle-boarding. Or not properly covering their faces. (Do pious Muslim women have an unfair advantage in this regard? Are laws being unevenly applied?)
In a sane world, criminals and criminal illegal aliens would be forced to shelter-in-place, say, in a jail, while law-abiding citizens would retain their Constitutionally guaranteed freedoms, not vice-versa. 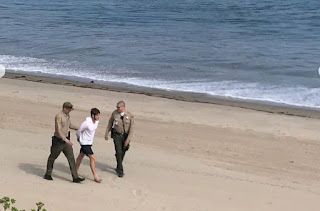