This Thanksgiving, Cuddle With A Turkey, California Farm Suggests

The Gentle Barn, a California animal shelter (with additional locations in Nashville and St. Louis), will be hosting a turkey cuddling event this Thanksgiving. For just $25, participants can spend 90 minutes cuddling with, talking to, and feeding a turkey of their choice. (None of them are Joe Biden, FYI.) The Santa Clarita-based farm is offering these supposedly therapeutic sessions at all three of its locations, in keeping with its theme of “reverence for all life.”

The Gentle Barn’s website invites people to purchase tickets to “Gentle Thanksgiving 2022,” stating that
“delicious vegan pie” and “hot autumn drinks” will be served, while noting that cow-hugging is also an option at their locations.

The organization put out a news release stating: “We are inviting you on Thanksgiving Day to cuddle our turkeys. Celebrate life, love, and liberty with our majestic turkeys who should have been cherished throughout history for their intelligence, affection, and dynamic personalities.”

The barn(s) are hoping that those that get to know turkeys on a more intimate level will eschew eating them. To reinforce that notion, the Gentle Barn’s founder, Ellie Laks, instructs us via a Facebook video: “Just because we’ve always done something a certain way, doesn’t mean that we always need to in the future.”

Turkeys are “affectionate?” Really? Like, say, geese? “Majestic?” With a fat, feather covered backside, skinny legs, a pinkish bald head…and a long, fleshy waddle hanging from their necks? I think not. But are they “intelligent?” By some accounts, they may drown by looking up when it’s raining. Even if that notion is apocryphal, they routinely stand on the sides of highways eating gravel while cars go racing by mere feet from them. “Dynamic personalities?” I mean, they all gobble and strut, but I’ve never seen one with overwhelming charisma or sex appeal. But maybe that’s just me.

As for the barn’s alleged “reverence for all life,” I virtually guarantee you that most of its employees-- the majority of whom appear to be female-- are “pro-choice” when it comes to abortion. Human abortion, anyway.

For the past couple of years, authorities have told us it was too dangerous for us to gather with our closest friends and relatives for Thanksgiving. And now we’re being asked to spend 90 minutes “cuddling” with a turkey? And we have to pay for this privilege?

What does the CDC have to say about this? Has Dr. Fauci weighed in on the matter? What happened to social distancing? Are masks required to snuggle with the Gentle Barn’s turkeys? And is it not fowl play to play with fowl in this manner?

For less than $25, I can have a turkey dinner with all the fixings, vegan and not.

For that, I am thankful. 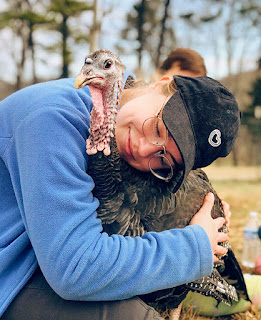 Which president once worked as a fashion model?

*”The Most Dangerous President In History”—Nick Adams (2022; Post Hill Press)