There is no doubt that school isn’t what it used to be. Nor is there any doubt that many of today’s teachers are, frankly, perverts. Recent examples are legion. Incredibly, even “STEM” classes (science, technology, engineering and mathematics) have been infected by wokeness, CRT (Critical Race Theory), LGBTQ worship, and a Marxist-Socialist ideology.

Even sadder, this agenda has been thrust upon younger and younger students until it now permeates every level of “education” including elementary schools. As a case in point, one school district recently had some of its students take a “math” quiz with truly bizarre multiple-choice questions.

In the context of asking students to solve a simple algebraic equation for x and y, one question from the “Person Puzzle” quiz-sheet asked if Nobel Laureate poet Maya Angelou was “sexually abused by her mother’s”……“boyfriend,” “brother” or “father.” Another question asked whether the writer worked as a “pimp, prostitute and”……“Bookie,” “Drug Dealer” or “Night Club Dancer”…… to “support her son as a single mother.”

Drag queen story hours for kids as young as two-years-old are now de rigueur. “After school Satan clubs” are popping up around the ever more fruited plain. And non-binary witches are bragging about what ideology and sexual licentiousness they foist on their young charges. It appears many teachers now wish to be “educators” simply to fulfill their pedophiliac urges.

Joy was feeling sad one day after they saw on the news that Donald Trump might run for president again, even though he was soundly—and legitimately-- defeated in the last election. They started feeling better, however, when they realized that they had_____________________________.

b)  Math is racist

d)  Everything is racist

It is high time we teach the “educators” a lesson. Indoctrination of this sort is not instruction. It is not teaching. It is mental tyranny and child abuse. And something we will not abide. Their hubris is not acceptable. We pay for the salaries of teachers in the vast public school system with our taxes. They should-- quite literally-- be indebted to us. They should not be attempting to brainwash our children. 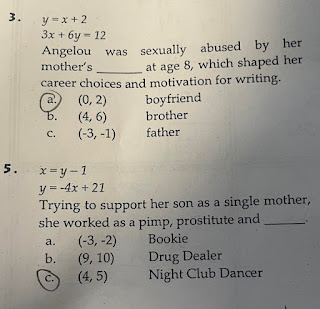