Many “Karens” really are who they appear to be when seen berating police officers or harassing the mask-less in recent months. According to survey data recently compiled by the New York Times’, of people possessing the twenty most common names in America—10 women’s and 10 men’s—Karens are the most likely to support Democratic presidential nominee Joe Biden over president Donald trump. A remarkable 60% of Karens surveyed favored Biden, while only 40% preferred Trump.

It is possible age has something to do with the poll findings, as Karen was among the twenty most popular names for girls born from 1941 through 1971, but not before or since. In any case, it is now the most memed name in the nation. As Laura Wattenberg, author of “The Baby Name Wizard,” told the Times, “If you’re losing Karens, you’re losing women.”

Or, as Biden himself would surely put it, “I tell you what, if you have a problem figuring out whether you’re for me or Trump, then you ain’t named Karen.”

The self-proclaimed “paper of record” polled over 17,000 voters from 18 battleground states over the past two months to determine what the voting preferences are for those with the twenty most common given names. Unsurprisingly, the seven least likely to vote for Trump are all women’s names. In increasingly anti-Trump order, they are: Mary (Trump 48%, Biden 52%), Susan, Elizabeth, Patricia, Lisa, Barbara…and Karen. Not a single man’s name was more inclined to vote for Biden than Trump. Christopher and Joseph tied for the least likely, with both split at 50% favoring Biden and 50% favoring Trump. Conversely, only three of the ten most common women’s names were more likely to vote for Trump than Biden: Nancy (Trump 57%, Biden 43%), Jennifer (Trump 56%, Biden 44%), and Linda (Trump 51%, Biden 49%).

Those named John were for Trump 53% to 47%, while those named William preferred Trump 58% to 42%. Those named Richard were the most inclined to vote for Trump, giving him the nod by a whopping 64% to 36% margin. I’m surprised at these findings in that I would’ve thought most Johns would favor Biden. I’m certain more Dicks do. 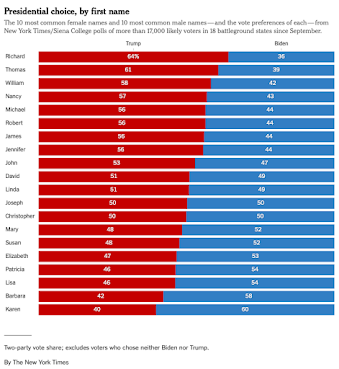