The Lady And The Tiger

Disturbingly, pictures of a woman fondling a tiger’s testicles at a zoo in Chiang Mai, Thailand surfaced recently.  Yes, you read that correctly. VICE News, the outlet that posted images of the incident, chose not to name the Thai tourist, who was promptly criticized on social media. Locals accused the wacky woman of “humiliating” the tiger, and the zoo of allowing the abuse of animals. Two Tiger Kingdom staff members were allegedly disciplined over the incident, though they claimed they told the woman of the rules and risks before letting her into the tiger cage. Call me a skeptic, but that doesn’t seem like a sound defense. Especially since they let her into the tiger cage.

Who should be the most humiliated, the lady or the tiger? I’ve often heard the expression “having a tiger by the tail,” but confess I can’t say the same for “having a tiger by the testes.” In truth, the big cat appeared utterly unfazed by the wanton woman’s hold on his balls, but this may well have been due to him being under the influence of sedatives. Apparently, Asian zoos frequently drug big cats to keep them from exhibiting unruly behavior.

My question is: Has everyone just gone crazy? Did either the woman or the zoo staffers do a simple cost-benefit analysis before making their decisions? The woman would naturally think: “I could cup the tiger’s balls and possibly be okay…or I could get mauled or killed. Alright, I’m gonna do it!” Similarly, the zoo staffers would say to themselves: “Hmm, we could let a woman grab the tiger’s sack, and maybe nothing heinous would happen, or she could get mauled and we could get sued. And/or it could go viral and we could be made to look as if we don’t care about our visitors or our animals. Okay, let’s let her in!”

How could anyone possibly reach those decisions? What possible good could come from them?

I’ve been asking myself those very same questions far too frequently in 2020. 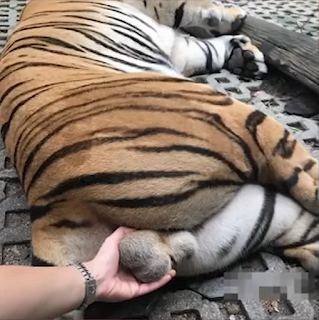 What alias did James Madison use in writing his Federalist Papers? (Answer below 'My Blog List' below)