A recent Bloomberg Opinion piece helpfully provided Americans with sage advice on how to deal with the current unprecedented inflation, which included eating beans, taking the bus, and skipping chemotherapy for your sick dog. Oh, and the article also suggested selling your car.

A self-proclaimed "retirement security expert" and professor of economics at the New School for Social Research named Teresa Ghilarducci wrote an opinion piece for Bloomberg titled "Inflation Stings The Most If You Earn Less Than $300K. Here's How To Deal." Ghilarducci noted that "Meat prices have increased about 14% from February 2021 and will go up even more,” and added, "Though your palate may not be used to it, tasty meat substitutes include vegetables (where prices are up a little over 4%, or lentils and beans, which are up about 9%)."

I don’t know what Ghilarducci makes, but 98% of the U.S. population makes less than $300,000 a year. And vegetables, lentils and beans, tasty or not, are not “substitutes” for meat.

Sell your cars, people? And then eat lots of beans and take public transportation? Great advice! But you might want to wear a mask on the bus or train even if it isn’t required. A gas mask, preferably. And then let your dog die. Or, better yet, eat it to quiet those hunger pangs. Cheap meat!

Surprisingly, the Bloomberg Opinion piece did not go over well with some rubes in flyover country. Don’t question the government. Just give up your personal automobile. And meat. And your dog. And maybe your home. Mortgages are so spendy these days! It’s much cheaper to hang out in a Starbuck’s bathroom.

As someone once (might have) said, “Let them eat cake!” Or beans. Because they can’t afford anything else.

That’s what government can do for you! 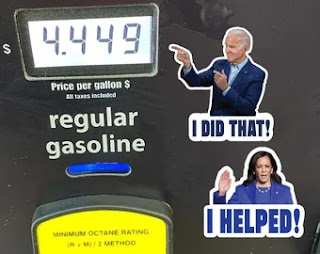