“National Strategy On Gender Equity And Equality” Just A Start For Biden Administration?

Vice-President Kamala Harris proudly took to Twitter to announce that the White House has issued "the first ever National Gender Strategy."

No wonder she and President Biden haven’t had time to visit the border with Mexico.

The official document, adorned with a miniature White House under which the words “The White House” and “Washington” appear, is officially titled “National Strategy On Gender Equity And Equality.”

Rumor has it that administration officials also considered naming the vital strategic document “National Strategy On Gender Equality And Equity” before opting for “National Strategy On Gender Equity And Equality.” One unnamed official reportedly said heated debate ran on for many hours between those who thought one or the other title was itself more equal and equitable.

In any case, Americans should thank God-- well, actually Uncle Sam-- that their federal government now has an official Gender Strategy. And the administration isn’t expected to take much time to savor its accomplishment before attempting to put together a comprehensive blueprint for the consumption of baked goods. Insiders say a “National Strategy On Pastries And Bagel Eating” could be unveiled as early as next month. And that, they say, could be followed by a program detailing a national strategy for the advancement of origami.

Some “MAGA” types, and other opponents of the administration, have mocked the creation of a “national gender strategy,” and have suggested that a strategy for dealing with China, Russia, Iran or North Korea would have been more pertinent, timely, and beneficial. Other critics claim that many Americans would have preferred the rollout of programs for dealing with the border crisis, economy, national debt, and ongoing pandemic with the subsequent loss of their personal liberty.

Still other skeptics, cranks, and poke-noses contend that our high-end public servants should address topics such as how American history is taught in our public schools, the ever-increasing attacks on free speech, and the decline in both religious faith and faith in nearly all major American institutions.

You can’t please everybody. Sometimes you have to prioritize. 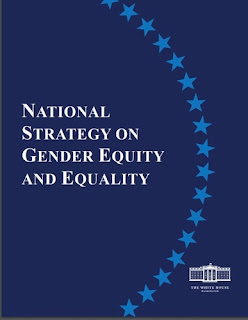