Climate change has been in the news a lot in recent years. This is odd, in that saying climate changes is like saying we all grow older. It is an obvious fact. If climate didn’t change, the Earth would be dramatically less diverse. Furthermore, we don’t know that it is even theoretically possible for climate not to change. Perhaps that could be in a void or black hole.

These truisms have failed to prevent “experts” and young, snot-nosed kids alike from flying around the world babbling on about the existential threat that “climate change” poses to life on Earth, particularly global warming.  The has led to an explosive growth in climate litigation in recent years. And now the European Court of Human Rights (ECHR) is considering a case filed by six Portuguese youths, aided by an ongoing crowdfunding effort, in which they argue that the governments of 33 European nations have not done enough to prevent the impacts of climate change from violating their citizens’ human rights. The ECHR has forwarded the case to the defendant countries and asked them to respond. It even went so far as to pose the question of whether climate change may constitute a violation of Article 3 of the European Human Rights Act on “inhuman or degrading treatment or punishment.” Since the ECHR’s decisions are legally binding, if the body hears the case and finds in favor of the Portuguese youth, it could order national governments in Europe to dramatically increase-- and speed up-- their efforts to reduce so-called greenhouse gas emissions, dramatically affecting the lives of their citizens. Possibly leading to “inhuman and degrading” economic conditions for hundreds of millions.

One of the litigious lads and lasses averred: “This year there were more fires and we were afraid to leave the house to visit the countryside during the summer.” He said flatly: “This shouldn’t be happening.” Well, there you have it, then. You should have been around during the ice ages…or when a large meteorite hit the planet…or after a few of the most devastating volcanic eruptions, kid. After Mount Tambora erupted (on Sumbawa, an island of modern-day Indonesia), the world got colder and weather systems were completely altered for three years, leading to widespread crop failure and starvation across much of the globe. That’s what global cooling does, Einstein.

There is another definition for “climate,” of course: the prevailing trend of public opinion or of another aspect of public life. An atmosphere, trend, mood, spirit or feeling. This kind of climate has been quickly changing for the worse. Most of the self-same people who lament the “catastrophic” effect of climate change on children are pro-abortion. You see, we violate our children’s human rights if, as a byproduct of providing for their food, clothing, shelter, transportation, education and entertainment, we potentially risk raising the temperature of the planet by one degree Celsius in the span of several generations. However, if we simply kill them in the womb, that is not a violation of their human rights. It is, in fact, a validation of ours! Got it?

In this sense, the climate is changing. We are getting dumber…and less moral. 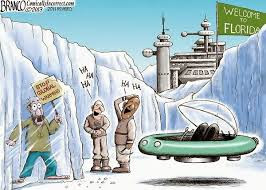 What percentage of the population died in the U.S. Civil War?