Antifa militants recently vandalized the historic Metropolitan Republican Club in New York City, due to its support of President Trump-- and because the club had a Christmas and Hanukkah celebration scheduled for later that same day, according to reports. When club members arrived that evening, they were greeted with anarchist graffiti, Antifa symbols spray painted on the building, and the phrase “You’re canceled” across the large, wooden entrance doors. Additionally, “ACAB”—short for “all cops are bastards”—was spray painted on the building and black bags symbolizing dead bodies of peoples of color were left on the sidewalk leading up to the edifice.

Walsh Reilly, the club’s president, noted that the members were observing the mandated social distancing guidelines. He added, "We were then having a celebration of religion — of Christianity and Judaism and their holidays — and that was the date they chose to attack the Met Club. It shows such intolerance from the very people who say they are anti-fascist."

Peace on Earth and good will towards men? Antifa spits on that notion, instead saying, “F*ck that, f*ck you, f*ck God, f*ck everything up.” Until the vast majority realize that Antifa is the opposite of what it claims to be, is nothing more than human scum, it will get away with trying to vandalize everything we used to hold dear. Antifa is not an idea. Sadly, it is very real. It, and those that aid and abet it-- such as those in the BLM movement and craven Democratic politicians—are literally trying to destroy America…with a little help from their friends overseas.

Here’s an actual idea: Let’s stop coddling these thugs. And return America to the rule of law and other founding principles. That is the only hope for Peace on earth, good will towards men…and the freedom to worship if, when, where-- and how-- you want. 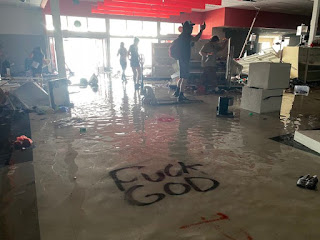 What vice-president suggested that the U.S. fund an expedition to the center of the Earth?

*”What are they made of? The day is not far off when it won’t be signatures we’ll have to give, but lives—the lives of millions. Can we survive? Do we deserve to do so when there’s no courage anywhere?”—Winston Churchill (Speaking of those who were too scared to even put their names to principles and policies of which they professed to believe in the lead up to World War II.)

*”Return of the God Hypothesis: Three Scientific Discoveries That Reveal the Mind Behind the Universe”—Stephen Meyer (2021; HarperCollins Publishers)