Columbus Statue To Be Replaced By Chef Boyardee


There is a trending online petition calling for the statue of Christopher Columbus in Cleveland, Ohio, to be replaced by…you guessed it…one of Chef Boyardee. The recent Change.org plea urges the Cleveland City Council to remove the likeness of the man who discovered America in favor of one of Ettore Boiardi, the man who discovered ways to package and sell various pasta products at reasonable prices.


Boirardi emigrated from Italy at age 16, and eventually moved to Cleveland and opened a restaurant. His sauce became so popular that he began bottling it for sale, and the enterprise grew to become the Chef Boyardee brand of pasta and sauces that we know and love today. Only in America. But his success story was only possible because of Christopher Columbus. The man affectionately known by his Americanized moniker, “Chef Boyardee,” would live in Northeast Ohio until he passed away in 1985.
The petition to jettison Columbus has nearly 3,000 signatures as of this writing and claims, “Columbus is not someone we should celebrate. He was a racist monster who initiated the genocide against indigenous Americans.” Monster? Really? The petition does, however, praise Boiardi and his legacy as an “immigrant success story who enriched our community with his food and iconic mustache.”
And his mustache? Well, no wonder why. Columbus was clean shaven. Couldn’t possibly compete with the hirsute Italian chef.

Look for any remaining statues of George Washington to be pulled down and replaced by the large, red and white checkered-overall-adorned likeness of Marc’s Big Boy fame. Lincoln statues will give way to those of the Pillsbury Dough Boy. Those of Jefferson will be replaced by figures of Betty Crocker. Any statues of Bill Clinton extant? If there are, those might be unmolested, so to speak, as many consider him “the first black president.” But, who knows, statues of abolitionists have come down and that of Frederick Douglas was recently vandalized. If a monument to Clinton is removed, it could well be replaced…by an Oscar Meyer Wienermobile.

I know what you’re thinking. But, after all, both Bill Clinton and Oscar Meyer have a way with… B-O-L-O-G-N-A. 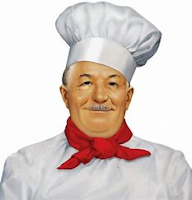