A college professor wrote an article for the Journal of Medical Ethics whose thesis contained the sentence, “There is nothing magical about passing through the birth canal that transforms it from a fetus into a person.” It, of course, being the baby/fetus. A study published in the Journal argues that babies have no “moral right to life,” and therefore aren’t actually human beings…until the parents decide they are.
Liberals famously don’t believe that life begins at conception, nor does their pro-choice crowd believe that babies in the womb are actual, viable people.
If the act of being born is no longer enough for them to consider a baby a real, viable person, we have entered a brave new world, indeed. Ethics aren’t what they used to be. Where does that leave us?
Mark Harrington, director of Created Equal, stated, “We encounter people who think it is morally acceptable to kill babies after birth on a regular basis at almost every campus we visit. While this viewpoint is still seen as shocking by most people, it is becoming increasingly popular.” A few students, including a man attending the University of Minnesota, went so far as to suggest children up to 4 or 5 years old can be killed, because they are not yet “self aware.”
Some students have even signed fake petitions to make abortion legal in “the 4th trimester.” Thank goodness for higher education! No wonder colleges are cranking out so many brilliant, independent, courageous and ethical leaders!
The head of Voices for Planned Parenthood at Ohio State University explained, “As for post-birth abortion, I would imagine that my colleagues would think the ‘post-birth’ part was largely irrelevant, as we believe very strongly in abortion on demand, without apology, and it’s plain and simple that we should look to the woman’s morals and not shove our opinions where they, frankly, don’t belong.”
There’s something else you shouldn’t shove where, frankly, it doesn’t belong. At least unless you are man enough to be responsible for the consequences of your own actions.
For their part, Democrats actually defeated a bill back in 2012 that would have banned abortions based on sex selection. That’s correct, they actually voted to allow a couple that conceived a girl, but wanted a boy, to abort their daughter. The bill was termed the Prenatal Nondiscrimination Act. The vote was 246 to 168 against the bill, however it didn’t achieve the two-thirds majority needed to pass. Hell, what could be wrong with abortion based solely on the sex of the child? I mean, like, China and other nations allow it.
President Obama opposed the bill because he said it “intrudes on women’s right to privacy,” and would be “hazardous” for doctors who perform the procedure. It’s funny that the only time leftists don’t want to intrude on a person’s right to privacy is when they want to abort an innocent child. And it would be hazardous to the “doctors” that are killing these babies? Really? Who the bleeping hell would let these monsters get away with this b.s.?! It’s hazardous alright…to the babies that are being eviscerated.
A number of abortion activists say women should have the right to an abortion simply because  they shouldn’t be forced to have a child they don’t want. I’ve got an idea. If you don’t want a kid, don’t have sex. Then you won’t be forced to have one…or kill one. There is a mantra among the most radical abortion zealots: “Forced motherhood is female enslavement.” They believe it is “degrading” to women to be expected to go through with their pregnancy. Yet, if the rest of us are forced to pay for abortions, to have the fruits of our labor taken from us so they don’t have to go through labor, are we not, by definition, the real slaves? Perhaps those folks should crack open a dictionary now and again. And, is it not a tad degrading to, say,  your daughter (“potential” person) to think of her as a non-viable tissue mass that has no real worth until you say she does? Or to kill her? There’s a lot of talk about violence against women, but not enough about unconscionable violence committed by women.
Melissa Harris-Perry, an MSNBC host, addressed the issue of “post-birth” abortion on the air July 21st, 2013. She said, “When does life begin? I submit the answer depends an awful lot on the feeling of the parents. A powerful feeling…but not science.” The most radical abortion rights activists are now semi-publicly arguing that it is okay for parents to “abort” their children up to age three.
Ah, so life begins at age four! Or 3 years and one day?
Yet other radical  “liberals” are touting the benefits of breastfeeding a child until the age of three or four. Is this, then, to fatten them up for the slaughter or is it just another routine chore like slopping the hogs?
And now we have a couple who’ve decided to allow their 5-year-old daughter to transgender to a boy. Perhaps a child isn’t legitimately a human until they are done breastfeeding and ready to change sexes?
Liberals love stupid bumper-stickers. Many plaster them all over the back of their cars, usually at least slightly askew. Perhaps soon there will be a, “Have You Post-Birth Aborted Your Three-Year-Old Today?” sticker next to the obligatory, “Visualize World Peace” one.
What’s next, after-kindergarten abortions? Post-puberty abortions? Apparently there wouldn’t have been rioting if Trayvon Martin had simply been after-birth aborted.

We are far past the “slippery slope” here. 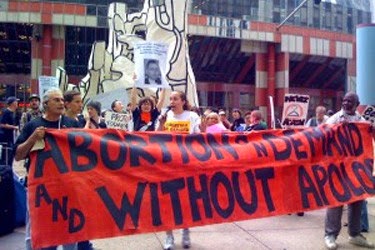