UCLA has budgeted nearly $1 million to design and build “bus stop” style cooling structures in response to climate change. Professors of engineering, urban planning, public health, and environmental law will work together to fabricate the structures that are intended to address global warming…at least in the Los Angeles area.

A UCLA press release noted that the two-year long project, cleverly called “Heat Resilient L.A.,” will first determine where and when people moving around the city are most vulnerable to the effects of extreme heat. It will then assess which communities most need “cooling interventions,” and subsequently work with local officials to decide where the new cooling structures should be installed.

A photo the school recently released of a prototype “cooling structure” that would also function as a bus stop can be seen below. But wait, don’t buses add to global warming by carelessly tossing their carbon emissions into the atmosphere?

In the old days we called them “shade”…or “trees.” 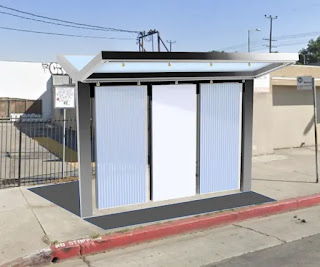